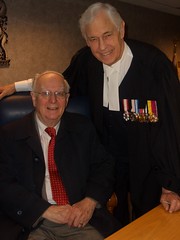 Image by antefixus21
Paul passed away June 16, 2012. CIC office no longer performs Citizenship Ceremonies at 55 St. Clair Avenue East, Toronto. Paul had volunteer presided at over 2,000 of these ceremonies.

L. Col PAUL JOHN TUZ CM, CStJ, CD Peacefully passed away Saturday, June 16, 2012. Born October 20, 1929 at Vienna, Austria. Served 27 years in HM service, 10 years Chrysler, 20 years President Better Business Bureau and Hon Consul General of Mali. Survived by son Matthew, daughter Elizabeth, sons James and Mark and daughters Michaelle and his youngest and most precious Rebecca. Also survived by his spouse of 25 years Patricia Luna, who nurtured him during his last years. Special thanks for Dr. K. Yee, Dr. R. Chisholm, Dr. K. Pace and the caring and compassionate staff at St. Michael’s Hospital Palliative Care Unit. The family will receive friends at the HUMPHREY FUNERAL HOME A.W. MILES CHAPEL LIMITED, 1403 Bayview Avenue (south of Davisville Avenue) from 5 to 8 p.m. on Monday and Tuesday, June 18 and 19, 2012. A service will be held in the chapel on Wednesday, June 20 at 11 o’clock. Interment at Mount Pleasant Cemetery to follow. Donations to the Canadian Cancer Society , 55 St. Clair Ave. West, Suite 500, Toronto, ON, M4V 2Y7 or Princess Margaret Hospital, 610 University Ave., Toronto, ON, M5G 2M9 would be appreciated. Condolences and memories may be forwarded through <a href="https://www.humphreymiles.com" rel="nofollow">www.humphreymiles.com</a> – See more at: <a href="https://www.legacy.com/obituaries/thestar/obituary.aspx?n=l-c&amp;.." rel="nofollow">www.legacy.com/obituaries/thestar/obituary.aspx?n=l-c&amp;..</a>.

Graham William ”Bill” Burgman
Was born in Wingham Ontario, son of the late William and Olive Burgman. Loving brother to Ruth (Bob) Pestell and Jack Burgman (predeceased). Devoted husband to the late Kay (Katherine Richards) and loving and supportive father to Rick (Aina), Jane (Dragan), Robert (Sandra) and Tommy (predeceased). Doting grandfather to John, Kathy, Derrick, and Thomas Burgman. Predeceased by his brother-in-law Rick (Beverly) Richards and father-in- law JW ”Jack” Richards. He graduated and served as valedictorian at Wingham High School in 1941. He studied Dentistry at the University of Toronto, following the path of his cousins Bob, Bill and George Burgman. There, he met this future wife Kay Richards, who was a dental nurse. He served as President of the IVth year class in Dentistry. He graduated in Dentistry (DDS) from the University of Toronto in 1945. Then he entered military service serving as the station dental officer in Trenton, Ontario. He was discharged with a rank of Captain in the Royal Canadian Army Dental Corps. In 1946, he and Kay moved to Kirkland Lake to open a dental practice, where he remained practicing for 52 years. Always a man, who enjoyed his profession and his patients, he did not hesitate to stay late at the office or attend emergencies on the weekend. Recipient of many awards, he received the Service Award from the Ontario Dental Association; Continuing Education Awards from both the Ontario and Canadian Dental Associations. He was also involved with the Northern Ontario Dental Association. Active in the community, he served as President of the Lions Club, President of the Sesekinika Lake Cottagers Association, as well as being an usher at Trinity United Church, a member of the Kiwanis Club, a member of the Royal Canadian Legion and the Chamber of Commerce. Devoted to continuous learning and education, he served as Vice Chair of the Board of Northern College, President of the Board of Kirkland Lake Collegiate and Vocational Institute, and was a member of the Kirkland Lake School Board. A Freemason for 66 years, he was a Past Master of Corinthian Lodge#657 A.F. &amp; A. M. (now amalgamated with Doric Lodge #623) in Kirkland Lake and a Past District Deputy Grand Master of the Temiskaming District. In addition, he was active in York Rite, Scottish Rite and the Northland Shrine Club. In his leisure time, he enjoyed skiing, curling and family life at the cottage on Sesekinika Lake. He and Kay travelled extensively over six continents from China to Egypt to Australia, Brazil, Europe and Russia. He acquired a life-long interest in Egypt and the Pyramids. Following his retirement at the age of 75, he moved to Toronto. He volunteered at the Royal Ontario Museum and served as an usher at the Bloorview United Church, his church from university days. Bill is known to many and all for his friendliness, loyalty, even temperament, generosity and kindness. Family will welcome relatives and friends at the FRENCH FAMILY FUNERAL HOME (111 Burnside Drive, Kirkland Lake, ON.) on Friday, September 6th, 2013 from 7:00 to 9:00 p.m. Funeral Service will be held in the chapel of the French Family Funeral Home on Saturday, September 7th, 2013 at 10:00 a.m. Interment will follow in the Kirkland Lake Cemetery. In lieu of flowers, donations may be made to Northern College – Kirkland Lake Campus or to Doric Lodge #623 for benevolent use.
Arrangements entrusted to:
French Family Funeral Home 705-567-3565
<a href="https://www.frenchfamily.ca" rel="nofollow">www.frenchfamily.ca</a>